In Science and Health, Mrs. Eddy...

In Science and Health, Mrs. Eddy writes on page 423: "The matter-physician deals with matter as both his foe and his remedy. He regards the ailment as weakened or strengthened according to the evidence which matter presents. The metaphysician, making Mind his basis of operation irrespective of matter and regarding the truth and harmony of being as superior to error and discord, has rendered himself strong, instead of weak, to cope with the case; and he proportionately strengthens his patient with the stimulus of courage and conscious power."

The contrast between these two systems of coping with difficulties never fails to remind me of a healing I experienced a few years ago. 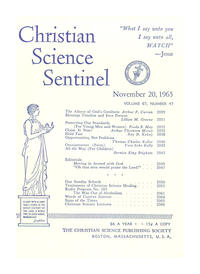