Meetings at which testimonies of Christian Science healing are given, are held in Christian Science churches on Wednesdays. A cordial invitation to attend these meetings, as well as the Sunday services, is extended to all. Information telling where and when these are held Ls given in the Directory in The Christian Science Journal.

Christian Science practitioners in the United States who have not previously elected coverage under the OASDI provisions of the Social Security Act are advised that the time limit for electing such coverage has been extended to April 15, 1965, by Public Law 88-650. The decision whether or not to elect such coverage continues to be one for individual determination. Inquiries should be directed to local Social Security offices. 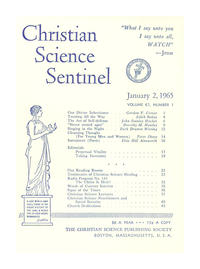