[The above is substantially the text of the program released for broadcast the week of June 19—25 in the radio series, "The Bible Speaks to You." heard internationally over more than 850 stations. This is one of the weekly programs prepared and produced by the Christian Science Committee on Publication, 107 Falmouth Street, Boston, Massachusetts 02115.]

RADIO PROGRAM No. 116 - Are We Developing Our Talents?

INTERVIEWER: I read something recently which bears directly on the question of talents. It was a comment by Charles F. Moore. Jr., who said: "There's nothing sadder than the boy genius who can't understand why the work that won him raves when he was 20 draws only polite applause now that he's 40. It may be that he has merely used his talent and hasn't developed it. It's great to show promise; it's tragic not to fulfill it" [Reader's Digest, August, 1963].

How can we learn to express our talents fully? 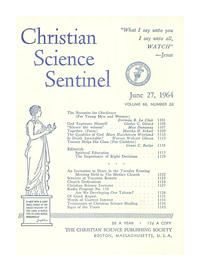