How Do we See?

When Jesus said to his disciples (Matt. 13:16), "Blessed are your eyes, for they see," he was not referring to material eyesight but to the faculty of divine Mind that Mrs. Eddy defines in Science and Health (p. 586), "EYES. Spiritual discernment,— not material but mental."

Many times a demonstration of true vision is recorded in the Bible. One example is given in II Kings. The king of Syria sought to kill Elisha because he had informed the king of Israel of ambushes, with the result that the king of Israel had been saved several times. Elisha was in Dothan, and the enemy surrounded the city. When he saw the enemy, Elisha's servant was very fearful. Whereupon Elisha prayed (6:17), "Lord, I pray thee, open his eyes, that he may see." And the young man perceived God's protection, for he saw that "the mountain was full of horses and chariots of fire round about Elisha." 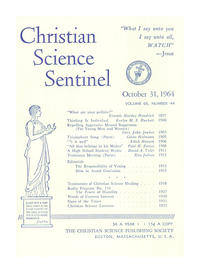