The following reports of fruitage from sharing the textbook, "Science and Health with Key to the Scriptures" by Mary Baker Eddy, have been selected from the many hundreds which were received in response to the letter of November 15, 1962, to all members of The Mother Church from The Christian Science Board of Directors.

An Australian aboriginal was brought to my home one day by his brother who had previously received help in Christian Science, and who requested me to tell him also something of the Christ, Truth. I was impressed with the natural way the truth unfolded in that conversation, and at the newcomer's receptivity and simplicity. His tender love for his son, for whom he desired help, was touching. He explained that the son, as a child, had had meningitis, that he had developed fits and other troubles, and that he was later placed in the state asylum for the insane. Prayerful, metaphysical work was begun for him.

Send a comment to the editors
NEXT IN THIS ISSUE
Testimony of Healing
I wish to express my gratitude to... 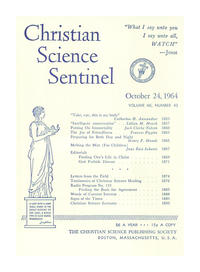