Dr. Wernher von Braun concluded an article he wrote in regard to exploration in space with these words: "It is impossible to predict the nature of all these discoveries: their cumulative effect will be tantamount to a scientific revolution. But it will also be a revolution of human perspective, and here may be space flight's most far-reaching payoff. We need not fear that future space explorers on their heaven-storming journeys will lose their humility. The heavens will surround them as an eternal reminder that there is a force greater than the thrust of their rocket ships, a spirit greater than the cold logic of their computers, a power greater than that of their own nation."

Mrs. Eddy writes in "The First Church of Christ, Scientist, and Miscellany" (p. 158), "We live in an age of Love's divine adventure to be All-in-all." What a blessing it is to recognize that this is the real age in which we live! What an opportunity this age affords for growth and progress! There are opportunity, challenge, and adventure in the discoveries to be made in material space, but how much more rewarding are the discoveries that can be made in the realm where God is found to be All-in-all! 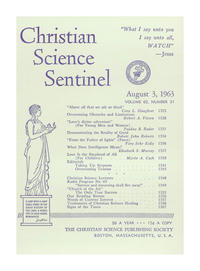