Of vital significance to the orderly progress and protection of Christian Science is the By-Law contained in the Manual of The Mother Church by Mary Baker Eddy, Article XXIII, Section 10, which reads in part, "In Christian Science each branch church shall be distinctly democratic in its government, and no individual, and no other church shall interfere with its affairs."

Our Leader evidently laid great stress on this provision, for a few years after this By-Law was adopted, she asked the then Chairman of The Christian Science Board of Directors and Editor in chief of her periodicals to publish in the Christian Science Sentinel (January 15, 1910) her wish with respect to greater democracy in Christian Science churches. Her secretary wrote: "Our Leader is desirous that all branch churches of Christ, Scientist, shall follow the growing tendency to adopt a truly democratic form of church government. She believes that all branch churches that have been more or less controlled by any one teacher, or the students of any one teacher, will find it greatly to their advantage to change to a broader and more liberal form of government. Mrs. Eddy is impressed with the wisdom of this movement, and would like you to call attention to the benefit the Field may derive from such action." 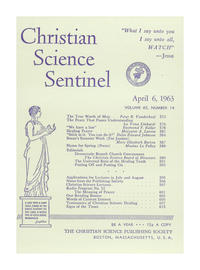