Before my birth Christian Science...

Before my birth Christian Science healed my mother of stomach trouble. The doctor in a sanatorium recommended Science to her after stating that medically no more could be done for her. I am grateful for my parents' steadfast loyalty to its teaching in the early years of the movement. Christian Science, I am grateful to say, has been the only religion I have known, and it has met every need of my life.

The doctor who examined me upon my entrance to college said that I had a condition called lordosis and that my back should be placed in a cast. It was stated that later on I would need special help with physical exercises. The doctor was also insistent that I wear special arch-supporting shoes.

Send a comment to the editors
NEXT IN THIS ISSUE
Testimony of Healing
We have been blessed in our... 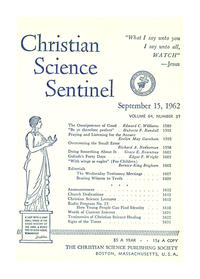