From the day I turned to Christian Science,...

From the day I turned to Christian Science, my family began to experience for the first time the unfoldment of a right sense of direction and purpose. At that time we were lost in a miasma of religious beliefs and doctrines and of medical theories.

I had been in a much-depressed state. I was unable to go about my daily duties of caring for a home and children. In retrospect, I can see that the condition was the result of a false hereditary belief; my mother had had a similar experience, the memory of which was lodged in my consciousness. I had been under a doctor's care for some time. Then through a friend, a Christian Scientist, I was led to seek guidance from a practitioner. Her ways inspired me, and through her I found God and man's relationship to Him. 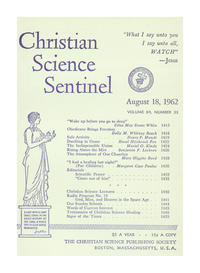