Some years ago, at a time of great need, Christian Science was presented to me. I had been under a medical doctor's care ever since the birth of my baby three months before, because I had not been able to regain my strength. The conditions medically diagnosed at that time included heart trouble, low blood pressure, low blood count, and nervous debility. I had been told that I could not tolerate any more injections of iron; so I was extremely frightened at the prospect of being taken to a convalescent home and leaving my new baby at home. There was a further complication: the baby was also ill, having for thirteen days been suffering continuous diarrhea, which had not responded to treatment. 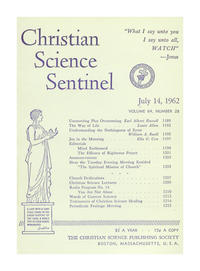