[The above is substantially the text of the program released for broadcast the weekend of November 16–18 in the radio series, "The Bible Speaks to You," heard internationally over more than 800 stations. This is one of the weekly programs produced by the Christian Science Committee on Publication, 107 Falmouth Street, Boston 15, Massachusetts.]

RADIO PROGRAM No. 33 - The Time for Gratitude

HOST: Traditional accounts of the Pilgrims' first Thanksgiving in 1621 dwell so heavily on the feasting and the harvest, few people today are aware of the severe hardships the early settlers faced. A history of Massachusetts describes their plight with a wry touch:

"Late in November, scarcely after the Feast of Thanksgiving, the ship Fortune arrived with thirty-five new colonists who came with happy smiles and good intentions, but without food or clothes. However, the survivors of the first winter joyously welcomed the newcomers and tightened their belts and mended their rags. ... Everyone had to go on half rations immediately." [The Story of Massachusetts, Vol. I, The American Historical Society, Inc., New York, 1938.] 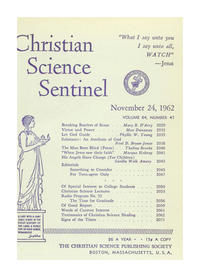