(lib'er-tenz—i as in is, first e as in maker, second as in eve; or -tinz—i as in is; or -tinz—i as in ice). The word is not here used in the sense of those who give rein to lust, but rather in that of manumitted slaves, freedmen, or sons of freedmen. These pronunciations are given in leading dictionaries of Great Britain and the United States and are especially recommended for this word, (si-rc'ni-anz—first i as in ice, second as in is, e as in eve, a as in account). Natives of Cyrenaica in North Africa or of its capital, Cyrene.

Send a comment to the editors
NEXT IN THIS ISSUE
Testimony of Healing
I have been infinitely blessed by... 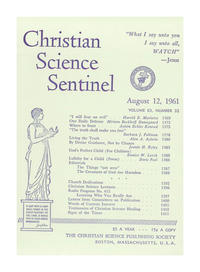