Through the prayerful work of...

Through the prayerful work of a Christian Science practitioner, I was healed many years ago of a fractured skull and its effects.

In the horse and wagon days, I fell from a wagon on which I was riding. The wheels ran over me and fractured my skull. Since I was unconscious, I was taken to a hospital. Someone called my father and told him where I had been taken and added that I was dead. He immediately called a practitioner and told her what had been reported. She at once began to pray for me as we are taught to do in Science.

Send a comment to the editors
NEXT IN THIS ISSUE
Testimony of Healing
At a time when I had extra work... 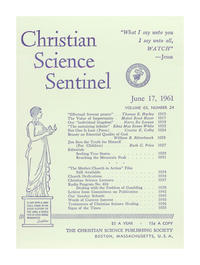