Christian Science makes it clear that the supremacy of God, divine Mind, rests upon His ability to enforce obedience to His laws. Obedience to God, then, is the fact of man's being, and disobedience is nothing more than a contradiction of spiritual fact, hence a myth, a supposition. A thoughtful examination of the teachings and the works of Christ Jesus shows that the ultimate purpose of Christianity is to reveal man, made in God's likeness, fully obedient to His resistless mandates.

When Jesus said that the two great laws were, Love God, and love your neighbor as yourself, he implied the divine order of being in which man invariably loves his Maker supremely and his neighbor as himself. The Christian Scientist understands divine law to be the force of Mind, which governs God's universe of spiritual ideas, and he is diligently engaged in getting rid of any human thinking and acting that would claim to reverse the fact of his obedient existence in Spirit as an idea of Mind. 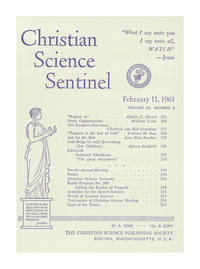