"Hear these imperative commands," writes Mary Baker Eddy in "Science and Health with Key to the Scriptures" (p. 37). Then she quotes Jesus' instruction to his followers: "'Go ye into all the world, and preach the gospel to every creature!' 'Heal the sick!'" Christian Scientists understand "these imperative commands'" to mean that they should make the truth available everywhere so that all who seek its healing power in humility and sincerity may be helped. 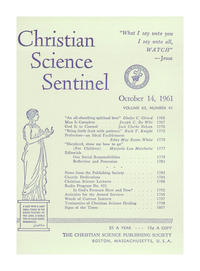