"The called according to his purpose"

"Every individual is called, even as was Jesus, to bear witness to Truth"

Paul, in his famous letter to the Romans, wrote (8:29), "For whom he did foreknow, he also did predestinate to be conformed to the image of his Son, that he might be the firstborn among many brethren." Paul, in pursuing his theme, had designated those whom God did foreknow and predestinate as "the called according to his purpose." This surely can mean that every individual is called, even as was Jesus, to bear witness to Truth. And every individual human consciousness follows obediently that calling of God in the degree that it manifests the Christ. 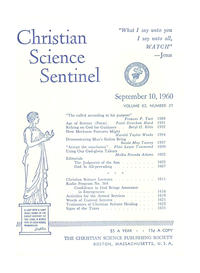