Before marriage I had been a...

Before marriage I had been a trained medical nurse, and until I found Christian Science I believed very strongly in medicine and medical treatment. I had tried many doctors in an effort to gain relief from severe migraine. Each one had told me that there was nothing he could do to help me. Finally I underwent a major operation in the hope that it might help, but the day I was taken home from the hospital I had the worst attack I had ever had; so I knew that the operation had failed. By this time other beliefs were being manifested, such as anemia, stomach disorders, and nervous troubles.

The last doctor who tried to help me told my husband that unless I was constantly under the influence of certain injected drugs, I would be a semi-invalid. The treatment caused much pain and discomfort, and one day I found myself saying aloud, "Live or die, I'll never take another one of those injections." With this decision came a sense of peace, and I began to pray humbly to God to show me what I must do to be healed.

Send a comment to the editors
NEXT IN THIS ISSUE
Testimony of Healing
How grateful I am to God for... 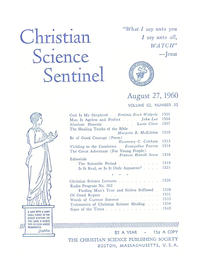