One of mankind's greatest fallacies has been its failure to distinguish between cause and effect. Looking to matter as cause, men have never reached the basic error of human inharmonies and sicknesses. They have sought cause in effect and have been obstructed by their inability to distinguish between the two. Dosing the body or removing unhealthy conditions by surgery may give temporary relief; but such measures never get at the cause of physical problems, nor do they remove them scientifically. Christian Science insists that until an error is destroyed in thought, it cannot be said to be eliminated.

One very important aspect of Mary Baker Eddy's discovery of Christian Science is her uncovering of the fact that the flesh and its ills are mental, are illusions, conjured up by the mesmeric action of the carnal, or mortal, mind. It follows that physical discords must be dealt with in mind alone. Mrs. Eddy says in "Science and Health with Key to the Scriptures" (pp. 108, 109), "My discovery, that erring, mortal, misnamed mind produces all the organism and action of the mortal body, set my thoughts to work in new channels, and led up to my demonstration of the proposition that Mind is All and matter is naught as the leading factor in Mind-science." 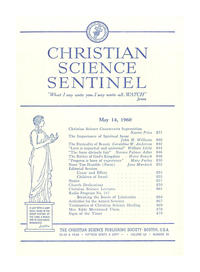