My faith in the healing power of...

My faith in the healing power of prayer, gained from active membership in a Protestant church since childhood, was shaken during my father's last illness. Then a few months later during an influenza epidemic my faith in materia medica as an auxiliary to God's work was questioned when my case was pronounced by the doctor as being beyond medical help.

At that time I could not understand how my husband could seek out and read Science and Health which he had kept since attending Sunday School in The Mother Church. He seemed unconvinced that death was God's will for me, although I was trying to reconcile myself to believe this.

Send a comment to the editors
NEXT IN THIS ISSUE
Testimony of Healing
I have long wanted to give a... 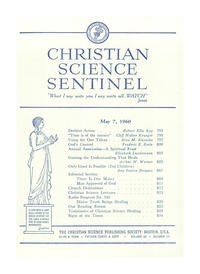