The first healing in our home...

The first healing in our home through Christian Science was that of our son, who, because of a malnutritional disorder, weighed at the age of six months but four ounces over his weight at birth. His healing was immediate, and within two or three weeks he was a normal and healthy baby. This brought to me a deep and abiding conviction that I had found God, and although I did not seriously study this Science at once, yet that conviction remained to guide and heal when I was willing to be divinely led to apply this great truth.

Many so-called children's diseases were avoided by our handling of the suggestion of contagion, and the discords that appeared were quickly healed. 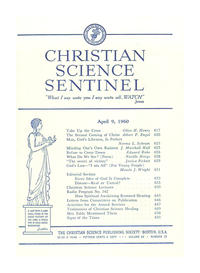