It is nearly twenty-six years now...

It is nearly twenty-six years now since Christian Science became my way of Life. I turned to it not for physical healing but for logical answers to my questions concerning God and man. Although I had been active in several orthodox churches, I could not accept the concept of God as not only loving, but also vengeful, not only omnipotent, but also competing on no better than even terms with a mythical evil personality or power known as the devil.

But Science brought healings and answered all my questions. An acute case of ptomaine poisoning was overcome with the help of a Christian Science practitioner, who told me that there is no reason to fear, for man is ever in the presence of God. I was at my post the following morning without having missed a day of work. 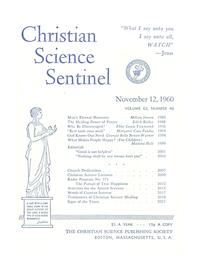