When I was twelve years old, my...

When I was twelve years old, my parents became interested in Christian Science; and from that time until my twentieth birthday I had the great privilege of attending a Christian Science Sunday School. During my twenties, however, I did little more than to read daily the Bible Lessons from the Christian Science Quarterly and attend services in a branch Church of Christ, Scientist. Later I married, and with the Second World War came many problems. I then turned more earnestly to the study of Christian Science.

During the months preceding the birth of our first child, I received a wonderful sense of the fatherhood and motherhood of God, Spirit, and of man as His spiritual offspring. We had asked prayerful help of a Christian Science practitioner and had engaged a Christian Science nurse.

Send a comment to the editors
NEXT IN THIS ISSUE
Testimony of Healing
From early childhood I had the... 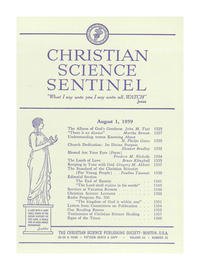