[Mentioned in The First Church of Christ, Scientist, and Miscellany, p. 316]

BENJAMIN ORANGE FLOWER began his editorial career in his birthplace, Albion, Illinois, when he was twenty-two. He had expected to be a minister, like his father, for the Disciples of Christ. A change in his religious views—he embraced the Unitarian faith, probably while he was attending Kentucky University—changed also his purpose.

With another young man he started a weekly family newspaper in Albion, which he called the American Sentinel. Being ambitious, he sought a larger field and so joined his brother, a doctor, in Philadelphia. From there he came to Boston, where he wrote on questions of the day for various magazines. 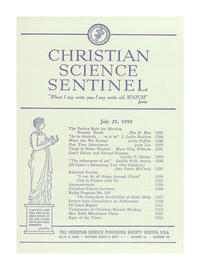