"UNTO EVERY ONE THAT HATH"

Christ Jesus, in his parable of the talents, described the kingdom of heaven as being like a man who planned a journey into a far country and gave to one servant five talents; to another, two; and to another, one. When the man returned, he found that the first two servants had doubled their money, and he commended them for their faithful service.

He who had received one talent, however, had been afraid to risk investment of it and had buried it for safekeeping. His lord called him a "wicked and slothful servant" (Matt. 25:26) and gave his talent to the man who already had ten talents, saying, "For unto every one that hath shall be given, and he shall have abundance: but from him that hath not shall be taken away even that which he hath." 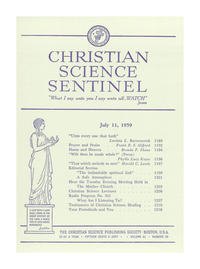