Inman H. Douglass, C.S.B., of Dallas, Texas, attended public schools in Kaufman and Terrell, and later studied at Southern Methodist University, at Dallas. He Served for several years in an executive capacity in the Internal Revenue Service of the United States Government.

Mr. Douglass became interested in Christian Science at an early age through his mother's healing, and shortly afterward he was healed of an organic heart condition which had been pronounced incurable. He became a member of The Mother Church in June, 1927, and received Primary class instruction in 1932. He entered the public practice of Christian Science in Dallas in 1942. As a member of a branch church there, he served as First Reader and in other capacities. 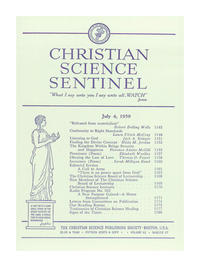