THE NEED FOR UNDERSTANDING LAW

What law is, where it operates, whence its origin, are questions which need answering. For law is the force which acts in consciousness to produce effect and govern phenomena. Mankind are presently governed either by God's law or by its opposite, so-called material law; and Christian Science shows men how to prove the superiority of divine law over material law, the spiritual over the temporal. To do this was the scientific purpose of the mission of Christ Jesus.

The natural scientist seeks law in matter, and mistakes physical force for real law. He may measure the forces of matter, may observe their action, may even utilize them precisely by bringing them under intelligent control. But he cannot explain them. Only through the perception of divine Science can one comprehend real law and come to the scientific conclusion that the forces of matter are counterfeits, expressing neither justice nor mercy, and that they must eventually give place to the loving forces of Spirit. 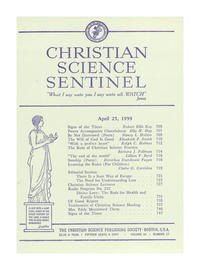