In her contacts with mothers of teen-age boys and girls who were either entering or already attending college, the writer heard it said many times that a certain young person was acquiring a degree of sophistication. This quality, from the point of view of the mothers, at least, appeared to be a very desirable part of a mature personality. It was something which they believed would enable their sons and daughters to cope with the world's social problems with a great degree of poise.

Having seen evidence of this quality called "sophistication" on a number of occasions and not having been impressed with what she saw, the writer was led to seek a dictionary definition of this illusive quality. She was astounded to find, in the light of the definition, that sophistication is in direct antithesis to the standard of Christian Science. She saw that it is, therefore, not a quality of mind to be cultivated by persons of any age. 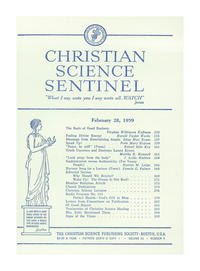