[Mentioned in The First Church of Christ, Scientist, and Miscellany, p. 304]

DURING the War of 1812 John L. Comstock first served as assistant surgeon at Fort Trumbull, New London, Connecticut. Then he had charge of three hospitals on the northern frontier. After the war he practiced medicine in Hartford.

About 1830 he began to compile the textbooks for which he became widely known and for which he did most of the drawings that were used as illustrations in them. His books covered such subjects as natural philosophy, chemistry, mineralogy, botany, geology, physiology, precious metals, and the Greek Revolution. His "Introduction to Mineralogy" was used at West Point, and his "System of Natural Philosophy," translated into several languages, had a sale of nearly nine hundred thousand copies. In 1847 it had been through ninety-four editions. 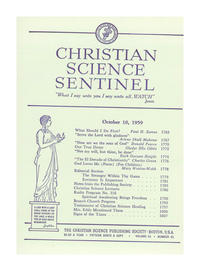