Occasionally one hears it said of an individual that he is a law to himself. This means that he does not conform to commonly accepted patterns of custom, but forms and follows his own standards.

This attitude is admirable or not, according to the motives governing it and the subject at issue. If the motive stems from rebellion against the discipline of morality, it is wrong and reveals an essential lack of moral strength. If it is dictated by enlightened conscience and if it involves divine Principle, God, rather than personal sense, it is right and will confer the reward of obedience and courage. 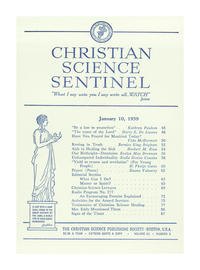