Soon after I began studying...

Soon after I began studying Christian Science, I was healed of a goiter through the help of a Christian Science practitioner. I was greatly impressed with this wonderful religion which had healed me so quickly. However, I was not then ready to give up my membership in the orthodox church of which my family had been members for many years. So I tried to hold to both religions.

About a year after this first healing, my husband and I moved to a small town where there were no Christian Scientists. For about two years I attended my former church regularly, but I also spent time each day studying Christian Science.

Send a comment to the editors
NEXT IN THIS ISSUE
Testimony of Healing
Since childhood I was an eager... 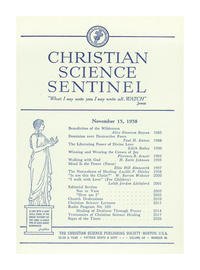