The deeper scientists delve into the previously unknown the more they are uncovering a universe where law and order are the rule, showing it as a carefully planned self-regulating concern in which man has unsuspected, undeveloped powers invested in himself, The ultimate reality, so far as scientists have yet been able to track it down, is not matter but, they say, probably some kind of force or energy that can neither be seen nor touched. . . . Not so very much, it would seem, divides them now from the first chapter of Genesis. 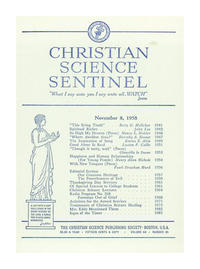