"THE BATTLE IS NOT YOUR'S, BUT GOD'S"

"Thus saith the Lord unto you, Be not afraid nor dismayed by reason of this great multitude; for the battle is not your's, but God's" (II Chron. 20:15). Centuries have passed since this comforting message was given to King Jehoshaphat and the people of Judah, but the promise and the victory which followed have inspired countless thousands down through the years.

Students of the Bible are familiar with the story related in the twentieth chapter of II Chronicles of how a great multitude came to fight against Jehoshaphat and his people. We are told that immediately he turned to God for help and proclaimed a fast throughout the land. When he stood in the temple, he affirmed the supreme power of Almighty God. He then spoke of his people's lack of defensive might against so great an invading army. He humbly besought God's help. And the "Spirit of the Lord" assured the people that they would not have to fight in the coming battle, but that they would "see the salvation of the Lord." 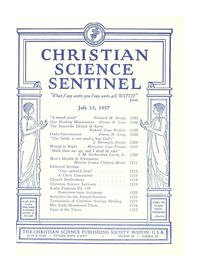