WHAT ARE WE SEEING?

In the twenty-fourth chapter of Luke's Gospel it is recorded that after his resurrection Christ Jesus appeared to two of his disciples as they walked to Emmaus. But they did not recognize their Master immediately. So fixed was their belief in the finality of death, and so feeble was their understanding of the deathless Christ, Truth, that the two disciples could not recognize what their eyes beheld. But later, when Jesus ate with them, "he took bread, and blessed it, and brake, and gave to them. And their eyes were opened, and they knew him; and he vanished out of their sight."

What is the significance of this event in the light of Christian Science? The disciples had suddenly recognized Jesus. They began to see the portentous implications of their Master's reappearance in the flesh. This evidence before their very eyes of Jesus' sublime victory over death enabled them to glimpse the eternal Christ, untouched by matter or the material senses. 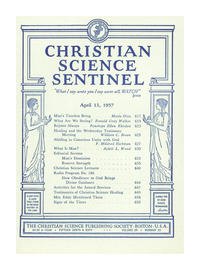