In the chapter called "Physiology" in "Science and Health with Key to the Scriptures," Mary Baker Eddy corrects mistakes which anatomy has long held to be facts. One mistake which has been particularly obstructive to mankind's attainment of health is the belief that much of the action of the material body is involuntary—not consciously impelled—and that one is helpless before that action. Such a belief gives the individual little control over the body and leaves him only a despairing hope that the flesh will behave properly so that he will not be hampered by it.

The mortal body, being the concept of the carnal, or mortal, mind, is directly under the control of that mind until one learns through Christian Science to demonstrate that divine Mind is All and governs all, hence that matter and human will are unreal. Then mortal mind and its body become submissive to God increasingly and will continue to act under divine control until eventually false consciousness and its concept of body disappear in the illumination of infinite Truth. 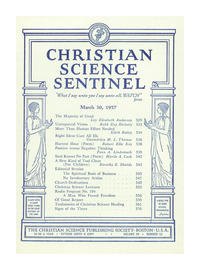