"Heredity is not a law," Mary Baker Eddy states on page 178 of the textbook, "Science and Health with Key to the Scriptures." This statement was proved in our family about twenty-five years ago. A nephew came to make his home with us when he was at the age of twelve years. At that time he was making weekly visits to a physician for tests to ascertain whether or not he was diabetic. His father, uncle, and great-aunt had passed on with diabetes early in life.

After being with us about six months, he asked permission to attend the Christian Science Sunday School with our daughters. He became a regular attendant and read part of the Lesson-Sermon each day. When he reached the age of sixteen years, he showed symptoms of diabetes and became very ill. It was an alarming experience, and our nephew appeared to be gradually wasting away.

Send a comment to the editors
NEXT IN THIS ISSUE
Testimony of Healing
I am glad of the opportunity... 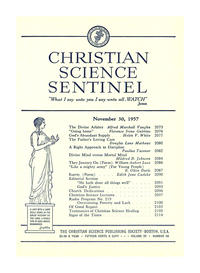