FIRST LESSONS FOR ALL

Sometimes one hears the wistful remark, "If only I could have gone to the Christian Science Sunday School!" The writer, having learned of Christian Science just a few months after the age when pupils are no longer received, thought for a number of years that she had missed an opportunity that could never come again. Regretfully she skipped over Article XX of the Manual of The Mother Church by Mary Baker Eddy, which refers to the Sunday School, for she felt that it did not concern her.

It was only after she had become a member of the Church of Christ, Scientist, and had made a more careful study of the Manual with a desire to be obedient to all its Rules that she realized the significance of Mrs. Eddy's statement in "The First Church of Christ, Scientist, and Miscellany" (p. 230), "Of this I am sure, that each Rule and By-law in this Manual will increase the spirituality of him who obeys it, invigorate his capacity to heal the sick, to comfort such as mourn, and to awaken the sinner." 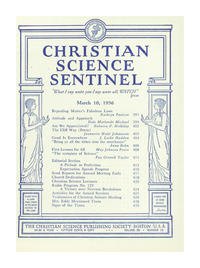