A LAW TO ONESELF

In a number of places in her writings Mary Baker Eddy speaks of a man's being a law to himself. The question often arises as to just what it means to be a law to oneself, and how this is accomplished. Of particular interest to the student of Christian Science is the relationship between being a law to himself and defending himself against mental malpractice, or the action of evil thought.

To be a law to oneself, one must understand man as the son or likeness of God who is constituted of His laws. Mrs. Eddy brings out the idea of sonship in the following statement from "Science and Health with Key to the Scriptures" (p. 458): '"The Christianly scientific man reflects the divine law, thus becoming a law unto himself." To the degree that an individual subscribes to this statement, he experiences the benefits of divine law. Christian Science demands subscribing to the law of spiritual reflection as a means of protection and of joyous and harmonious living.

Send a comment to the editors
NEXT IN THIS ISSUE
Article
WHAT IS OUR CONCEPT OF WORK? 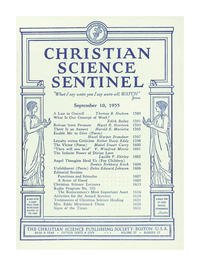