THE MAGNA CHARTA OF CHRISTIAN SCIENCE

There have been moments in human history when through an awakened sense of righteousness men have risen to oppose and defeat the tyranny of human willfulness.

One such occasion took place in the year 1215 A.D. and has special interest for students of Christian Science. At that time England was under the domination of a greedy ruler who burdened the whole land with his selfish demands for money. On the plains of Runnymede the English barons presented the king with a proclamation known as the Magna Charta or the Great Charter. Although the issue involved appeared to be the correction of a greedy and unjust taxation system, later such statesmen as Blackstone and Burke regarded the Magna Charta as one of the significant forerunners of democratic government. This bold document set forth a bill of rights based on mankind's God-given prerogative of self-government, and it was a direct rebuke and check to the tyranny of human will. 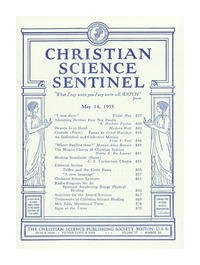