In gratitude for divine help in...

In gratitude for divine help in my hour of need I give this testimony, hoping it will encourage others to have faith in the power of God to heal. I was led to take up the study of Christian Science ten years ago when everything else had failed me. I had undergone a major operation, which had been very unsuccessful, and was suffering from serious complications. The most serious of these were kidney and bladder infection, hemorrhoids, and severe pain and numbness in my back, for which it was necessary for me to wear a support continuously. I had had medical treatments of various kinds for sixteen months, but like the woman in the Bible, I was no better and only grew worse.

In this discouraged state of thought I was invited by a daughter and a friend of hers who was a student of Christian Science to attend a Wednesday evening testimony meeting at a Church of Christ, Scientist. I was impressed by the testimonies of healing given. However, I believed that nothing but another operation could help me, as I felt that some of the organs of my body were out of place. After attending the meetings for several weeks, however, I decided to visit a practitioner. I was greeted with much love and compassion. After I told her my sad story, she explained to me that God is Love and does not send sickness and suffering to His children. When I left the practitioner's office, which was on the eleventh floor, and returned to the ground floor, my thought was so uplifted and free I felt as though I were still high above the earth and looking down on it.

Send a comment to the editors
NEXT IN THIS ISSUE
Testimony of Healing
My first instantaneous healing in... 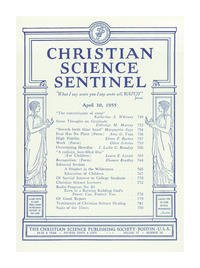