I should like to express my gratitude for Christian Science by means of a testimony in the periodicals. Some time ago my right arm began to give me trouble. The difficulty went so far that I was no longer able to use it. An X-ray examination showed that the ball of the right arm was being pushed out of its socket by a constantly growing layer of calcium. In the doctor's opinion there was nothing that could be done. I felt greatly discouraged.

A woman, whom I knew only slightly, noticed my difficulty. She told me about Christian Science and gave me the address of a practitioner. After my first visit to this practitioner, I felt much encouraged and firmly believed that I would be healed, although I was still in pain. On the way home this thought came to me as clearly as though someone had spoken it: "You can move your arm." Suddenly I found that I could move it, even enough to greet acquaintances with a handshake.

Send a comment to the editors
NEXT IN THIS ISSUE
Testimony of Healing
For over forty years Christian Science... 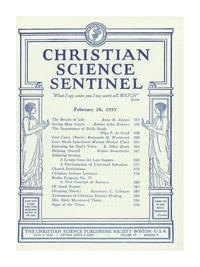