About four years ago in the...

About four years ago in the lounge of a Y. M. C. A. building I picked up a copy of the Sentinel and commenced to read it. As I read I became amazed. The thought came to me, "Here is the Word of Truth, line after line, paragraph after paragraph, page after page." I noticed numerous references to the Christian Science textbook, "Science and Health with Key to the Scriptures" by Mary Baker Eddy. These impelled me to go to a Christian Science Reading Room and purchase a copy, which I then began to read and study.

I had enlisted in the Army and was soon on my way to Korea. Though our battalion was frequently broken up to get replacements for front line duty, I was never at any time in danger. I was so occupied with my new-found religion that warfare seemed remote. At times I would find copies of Christian Science periodicals that were left at the Red Cross Club. These, along with the textbook and the Bible, which I had not before read seriously, became my daily companions and chief interest. The result was that for me Korea proved to be a haven wherein to progress in the study of Christian Science. 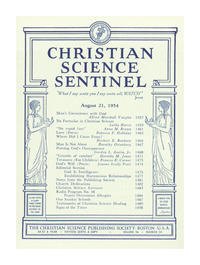