[Following is the text of the program of the above title released for broadcast the week end of April 23-25 in the radio series, "How Christian Science Heals," heard internationally over about 600 stations. This is one of the weekly programs produced by the Christian Science Committee on Publication, 107 Falmouth Street, Boston 15, Massachusetts.]

RADIO PROGRAM No. 32A - Examine Your Purpose in Life

On this program Floyd G. Summers of Westwood, Massachusetts, told of his own experience, as follows:

I was raised in a very religious home, yet at one time I swore I'd never go into another church. I think I felt this way because I had so many unanswered questions and doubts about God. And more than that, I went through frequent periods of depression and insecurity. But I have seen true prayer overcome all these problems, and I have learned more of the real nature of God and man. 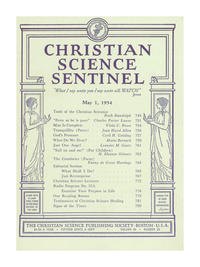