I should like to express my gratitude for all the good which has come to me and mine for many years. Through Christian Science help I experienced harmonious childbirth four times. Although complications developed at the last birth and doubt was expressed that the child would live, a call for help to a practitioner in a nearby city quickly brought about a normal birth. That child is now in the service of his country. The so-called childhood diseases which appeared were quickly healed, usually by our own application of the truth.

When my husband suffered a severe attack of hernia strangulation it was overcome after an all-night vigil, during which the one helping him remained at his bedside and realized the unreality of the distressing sense testimony. The seven pounds that were lost during this ordeal were quickly regained. Afterward, when the suggestion of an operation was presented, the rupture was entirely healed through the realization that the only operation needed in any case is the operation of divine Principle.

Send a comment to the editors
NEXT IN THIS ISSUE
Testimony of Healing
I wish to express my profound . . . 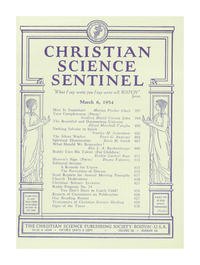