It was my good fortune to be...

It was my good fortune to be brought up in a home where Truth was the only physician, and I attended a Christian Science Sunday School for several years. However, when I left home, and when worldly attractions were presented to me, I failed to use my earlier training and eventually acquired the habits of smoking and social drinking.

Despite the fact that I did not abide by all the requirements of Christian Science, my love for it ran through my experience like a golden thread, and during my four years in uniform in the Second World War, I frequently sought its help. Before going into combat, I was transferred to a branch of the Army in which I had had no training. Feeling very lonely and fearful, I sought the help of a Christian Science Wartime Minister in London, England. I had only one interview with this worker, but it calmed and encouraged me so that I went away with confidence and enthusiasm. 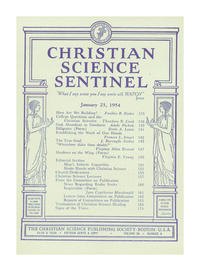