My class of six lively boys one Sunday morning was full of excitement. Their unusual interest was in something that the last one to arrive was showing them under the table's edge. At such a time the teacher whose capability is being challenged needs a thought free from previously outlined procedure in order to lead the children's interest as quickly as possible into the Lesson for that Sunday as given in the Christian Science Quarterly.

So, although I had as usual prepared very carefully for the class, using the Concordances, a Bible history, and a Bible dictionary, I turned away from any previous preparation and asked to have whatever they were interested in put on the table so that I could see if too. To my great surprise I found that the objects were what they called "buttons," or rattlers, from a rattlesnake. As I looked at them silently I asked the loving Father for just the right words. Then I said with a smile, "Let's put the 'buttons' away and talk about snakes." There was no doubt of the boys' interest in that subject. 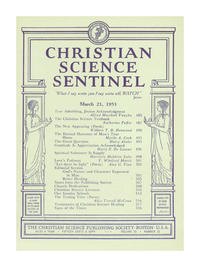