During World War II a letter was received from an Army officer overseas which read in part, 'If I am not soon ordered to the front line of battle, I'll have a hard time living with myself."

The response was: "One would naturally have difficulty living with impatient, inconsistent mortal self, human will, and human outlining. Such negativeness does not represent your real selfhood. Know your true self as the image and likeness of God. Let divine Mind direct and govern you and gratefully be at peace." 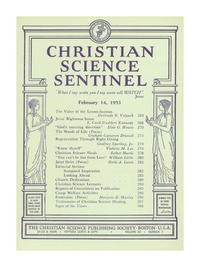