LOVE IN OUR HEARTS

"When the heart speaks, however simple the words, its language is always acceptable to those who have hearts." These words, found in Mary Baker Eddy's book "Miscellaneous Writings" (p. 262), preface a message of gratitude to her students for their conscientious and assiduous work of healing and comforting mankind through Christian Science, "Those who have hearts"! Our Leader needed such followers to carry out her great mission of taking the healing truth to all men. She knew that this task required inmost compassion that could never be swerved by love of self to leave its pure purpose of unfolding God's kingdom to mankind.

In Scriptural usage "the heart" often implies the secret thoughts of mankind. Christ Jesus read the thoughts of men, not through psychological methods, but through the ability bestowed by spiritualization of thought to detect the mental atmosphere of evil and discriminate between reality and unreality. How quick he was to discern Nathanael's guilelessness, the receptivity of Zebedee's sons, Peter's sense of discrimination. He knew at once where Love had penetrated human consciousness and imbued it with integrity. He recognized those who had hearts. He realized that those who glimpsed Love would cherish its presence and fulfill its demands; that the very love they expressed linked them with God. In his Sermon on the Mount he summed up the subject in the often-quoted words (Matt. 6:21): "Where your treasure is, there will your heart be also." 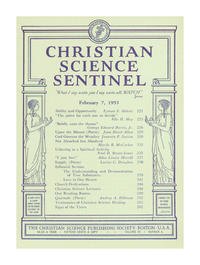