I should like to relate an experience which I had several years ago. I was traveling by train over the mountains with my two children, a boy seven and a half and a girl three and a half years old. Because of several days of snowstorms and wind the trains had been unable to progress farther than the snowsheds. When our train reached the sheds it also could go no farther. There was a freight train off the track just outside the sheds, and the wind was blowing so hard that the men could not work. The conductor came through the coach and said that we might be there for a week. He requested that the lights be turned low and that food be rationed. Although the coaches were closed tightly, in a short time the passengers began to be ill from the gas and smoke which blew back into the sheds because of the wind. Two women became seriously ill.

I had been studying Christian Science for only a short time, but during that period I had had a wonderful healing. I knew that there was a solution for this great need, for in the textbook, Science and Health by Mrs. Eddy, I had read (p. 494), "Divine Love always has met and always will meet every human need." I believed that this was true.

Send a comment to the editors
NEXT IN THIS ISSUE
Testimony of Healing
"Therefore with joy shall ye draw... 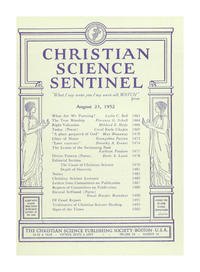