WHAT CHRISTLIKE QUALITY IS NECESSARY?

The many claims upon the time, energy, thought, and supply of the active person today, even though they be apparently legitimate, frequently leave him with a sense of depletion, of personal inadequacy, and sometimes of downright resentment, thus robbing him of his birthright of joy and serenity. But if we think of the claims as actually representing a divine demand for the reflection and expression of man's true nature in God's own image and likeness, we shall see that the qualities of the Christ are being demanded of us simply because these qualities have been bestowed upon us by our heavenly Father.

Not only are they to be expressed, but they must be progressively developed through an increasing understanding and demonstration of practical Christianity and mature into effectiveness, freedom, and fullness. In that most helpful article called "The New Birth," in "Miscellaneous Writings," Mary Baker Eddy says (p. 16): "The Principle of Christianity is infinite: it is indeed God; and this infinite Principle hath infinite claims on man, and these claims are divine, not human; and man's ability to meet them is from God; for, being His likeness and image, man must reflect the full dominion of Spirit— even its supremacy over sin, sickness, and death." 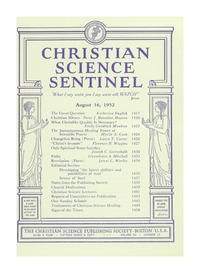