At a time when the demands...

That afternoon I had a much freer sense than I had had for some time, and the awareness of Love's presence was so clear that as I walked from my office toward the subway that evening I knew that I was actually living in Mind. Suddenly I heard a cry for help, and turning I saw an elderly man sitting on a doorstep. I went to him, giving him my hand, and a man came to help him from the other side. Together we assisted him across the sidewalk to the bus stop, where he told us he wanted to take a cross town bus. As the man started to board the bus, however, the driver refused to let him get on unattended. He said that the bus passed the address the man gave as his destination, so I consented to accompany him. It was as though the command came (Isa. 30:21), "This is the way, walk ye in it."

Send a comment to the editors
NEXT IN THIS ISSUE
Testimony of Healing
It is with great joy that I wish... 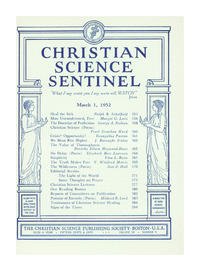